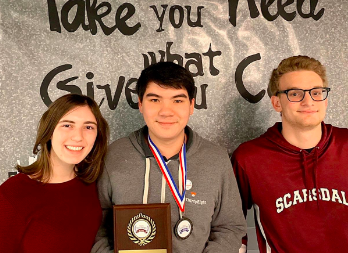 The SHS Quiz Bowl team advised by SHS physics teacher, Michael Egan, won first place at the New York City National History Bowl tournament on February 23rd at Basis Independent High School in Brooklyn. Run by Presidents Andrew Morin and George Primoff, the club meets every Monday during 7th period. “George and I have been apart of this club since sophomore year. We inherited it from a team of seniors and have been running it ever since last year,” explained Morin ’20.

Varsity members of the team, including seniors Andrew Morin, George Primoff, and Caroline Higgins, compete year-round in the Westchester League. The team also attends other academic tournaments located beyond White Plains and Chappaqua including a tournament at Yale University in October. “We don’t do that much individually except for the history bees. Usually, we do it as a team at all of these different events,” stated Morin.

The club participates in both quiz bowls and history bowls. On Saturdays, the team competes against ten to twenty schools in local quiz bowl tournaments. Each year, there are three regional tournaments that the team attends; the team has attended two so far. The third tournament is set to take place on March 14th. The first competition was the Lower Hudson Tournament in Chappaqua at the start of January when Morin tied for second in the bee and then got third in the tiebreaker. Overall, the team came in second, only losing by a small margin to the Darien team.

The second tournament took place in February when the SHS team competed in the History Bowl consisting of seven rounds, while Andrew Morin also competed in the History Bee consisting of only three rounds. Each round has around thirty questions with various formats. “It starts with just toss-up questions where they ask you the questions and the first to buzz in and get it right wins the points. Then, they go into bonus formats where your team gets an unopposed chance to answer questions. And then back into toss-ups. At the end, there are harder questions and you get more points if you answer the question earlier with less information. Part of the challenge is knowing when to buzz. You have to decide whether you want to risk it for more points or go for a safe bet at the end,” described Morin. The questions cover all history but are geared to focus on modern history. “There’s military, cultural, social, political, economic history. You name it. But it’s very simple: there is a question and one answer” reflected Morin.

All the members of the team have a good time competing and view being part of the team as a positive experience. “I like competing because getting to press the button when you know the answer is a lot of fun. History’s my favorite thing because I enjoy it a lot,” said Morin. “It’s a good way to showcase what we are learning in school. We are learning all this information and it’s nice to finally have a use for it,” added Primoff ‘20. “It’s really fun, you should join if you’re an underclassman,” concluded Higgins ‘20.

Based on their wins, Scarsdale qualifies for the National Championship to be held in June and the International History Olympiad in July.