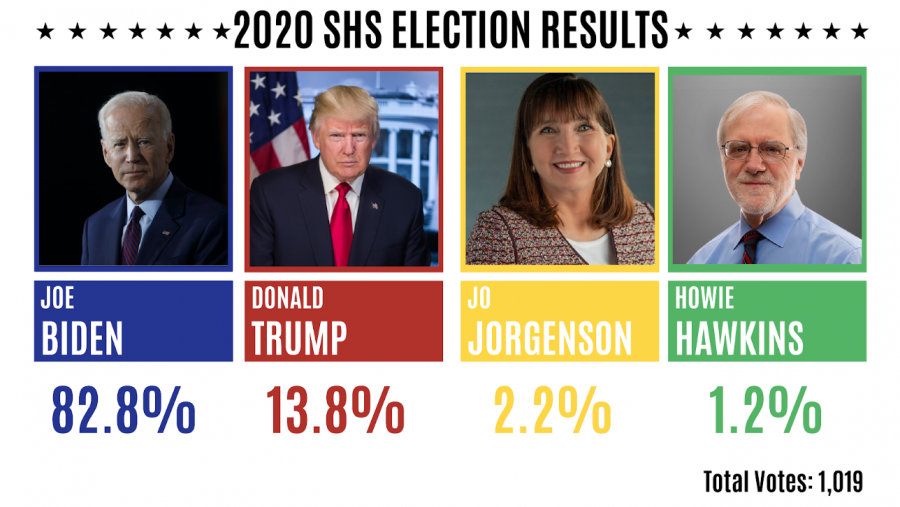 The results of a mock election hosted by the social studies department are released, shedding light on the political divide within the Scarsdale High School community.

As much of our time and energy over the weeks building up to the national election were consumed by politics, many of our students took a moment to reflect on their opinions and cast a vote in the 2020 SHS mock election. The extent to which our community represents the views of New York and the United States as a whole is a concept we encourage students to stop and consider.

Joe Biden won the mock election overwhelmingly, achieving 82.8% of the 1,019 votes cast. Donald Trump placed second, with 13.8% of votes from the student body. “I don’t think the results of the student election are surprising at all. Many parents in Scarsdale are liberal or Democratic so those beliefs are commonly passed on to the students at SHS,” commented Jessie Hausman ’22. While it is clear that Scarsdale residents lean towards liberal ideals, the incredibly strong support for the Democratic candidate was surprising to some. “I expected Biden to win in the student elections, but I was shocked that it was such a landslide,” stated Alexa Rosenbloom ’22.

It is important to regard the data presented with an informed understanding of its demographics. The percentage of voters who supported Donald Trump decreased as grade level increased. Trump was also strongly favored by males, as he gained only 5.3% of the female vote as opposed to 20.4% of the male vote. Biden was most popular among Black and nonreligious groups, while his opposition was favored mostly by biracial and Christian groups respectively. Trump supporters largely claim economy or taxes as the main reason for their vote, while Biden voters mainly factored in personal character and COVID-19 response.

Being a predominantly Democratic town, Scarsdale is significantly less divided than the rest of the country, as we learned from the outcome of the presidential election. What has developed to be a strong Biden-supporting culture at SHS is part of the reason many students enjoy and feel comfortable living in Scarsdale. However, this environment can be difficult to navigate for others. “[it is] hard to be a Republican – especially Pro-Trump – in the school. People have very strong opinions about politics and not conforming to the mostly Democratic population can make a student feel isolated,” remarked Hausman. This is why it is more important than ever that every person, no matter who they support, can remain open to discussion of politics during these stress-inducing times. Rather than continue on the trend of hostility, as discussion of politics can get at the moment, we must all work to have these difficult conversations in a way that allows for every student to be heard.