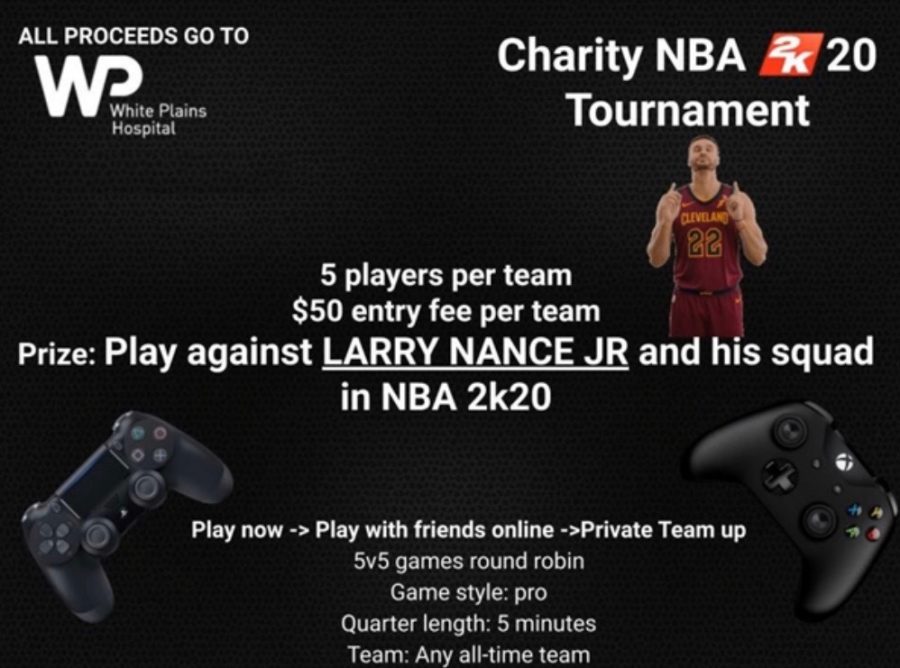 In an attempt to support White Plains Hospital, SHS Juniors Noah Weber and Max Roth recently launched an NBA 2k20 video game tournament. The tournament is open to both Xbox and PS4 and will be in the format of 5v5 team matchups. Teams can be any NBA team they desire, and the tournament is round-robin, followed by single-elimination.

Despite the damage COVID-19 has inflicted on millions of people globally, the Scarsdale community has taken a strong stance to aid the crisis. Within our local community, SHS students have been promoting coronavirus relief through charities and fundraisers. In an attempt to support White Plains Hospital, SHS Juniors Noah Weber and Max Roth recently launched an NBA 2k20 video game tournament.

Westchester County has been an area that has particularly suffered from the coronavirus outbreak, leaving local hospitals, such as White Plains Hospital (WPH), filled to capacity with COVID-19 patients. “My friends and I have been playing a lot of NBA 2k20 while quarantined. The NBA is doing a 2k tournament of their own, and we were inspired to do a similar tournament to help White Plains Hospital,” said Weber. “There are many different tournaments happening at this time for charity, but our tournament is giving 100% of the money made to White Plains Hospital to buy ventilators,” he added. Roth and Weber are both members of the White Plains Hospital’s junior board and have expressed a desire to help fund the hospital during this crisis. They have the goal of funding as many ventilators as possible, and ultimately want to rally members of the Scarsdale and Westchester community to help with WPH’s fight against COVID-19.

Weber, Roth, and their friends have partnered with Cleveland Cavalier Larry Nance Jr. to help raise funds for the hospital through the NBA 2k tournament. Weber and Nance started a non-profit organization in 2017 to raise awareness for inflammatory bowel disease, Crohn’s and Colitis, called Athletes vs. Crohn’s and Colitis. Both Larry and Noah were diagnosed with the condition and wanted to inspire and mentor young athletes with the disease. With that said, recent research indicates that Crohn’s and Colitis patients are not at an increased risk of contracting COVID-19 than the population at large. In addition, research also suggests that many of the drug therapies used to treat Crohn’s and Colitis do not increase people’s risk of contracting coronavirus and may in-fact help protect against lung issues. “Through Athletes vs. Crohn’s, Larry and I have become very close. Using his friendship, I wanted to leverage him for good use to give back to the community,” explained Weber. The two are working together, yet again, in this fight against the pandemic.

The tournament is open to both Xbox and PS4 and will be in the format of 5v5 team matchups. Teams can be any NBA team they desire, and the tournament is round-robin, followed by single-elimination.

Ultimately, the winner of the tournament gets to take on Larry Nance Jr. and his squad in a game of NBA 2k20. The tournament will include upwards of 50 participants, and the entry fee is $50 per team.

For more information on the tournament, visit https://www.wphospital.org/nba2k.aspx.