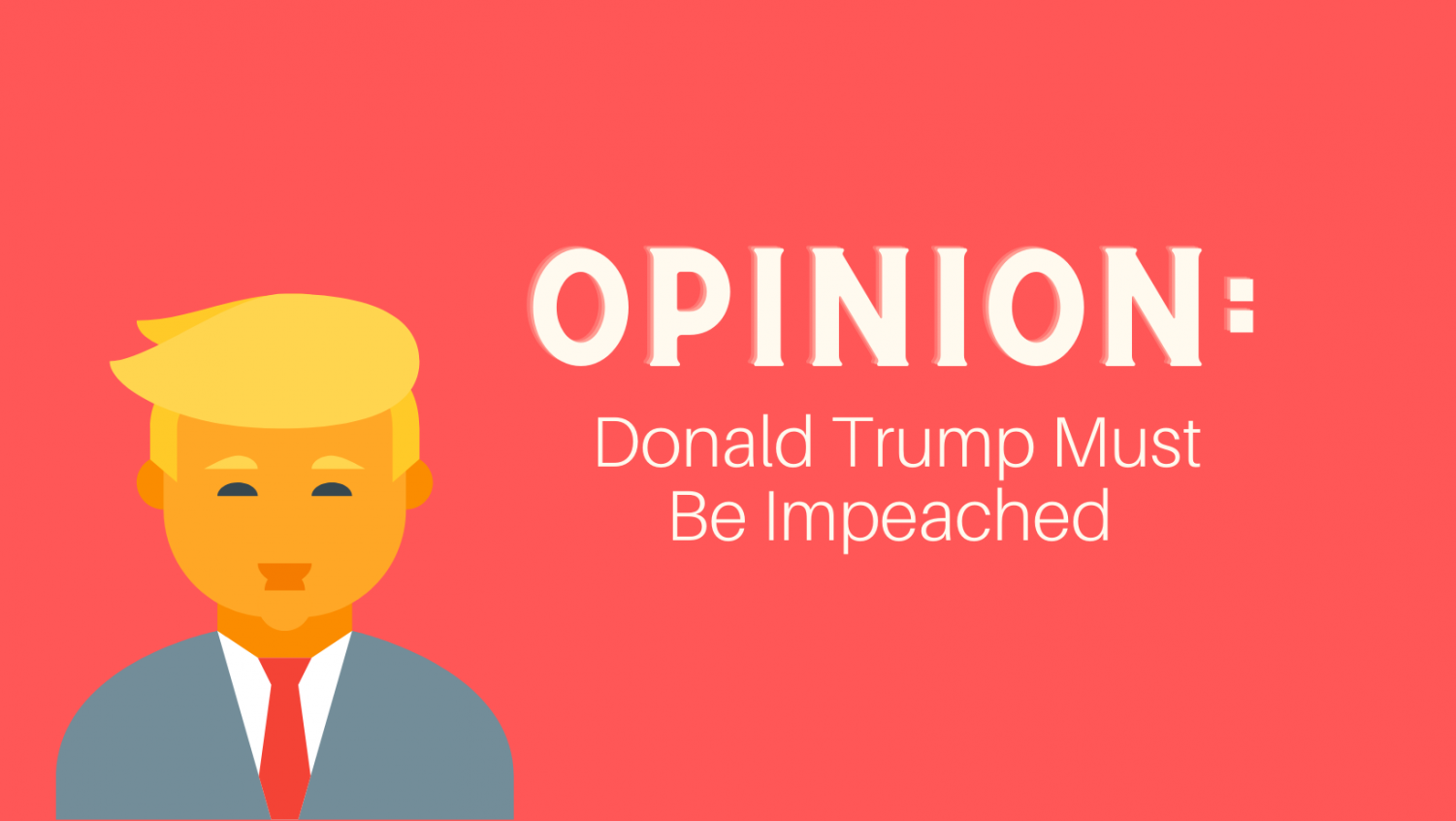 There are several reasons for Republican Senators to step up and impeach Trump.

There are several reasons for Republican Senators to step up and impeach Trump.

Opinion: Trump must be Impeached

During my English and World History classes on the day after the Capitol was attacked, my teachers altered their curriculum and spent the entire period helping the class reflect on the events of the previous afternoon. As I did more research into the events later that day, my earlier thoughts that President Trump was responsible for the insurrection at the Capitol were affirmed. Even Mitt Romney (R-U.T.), who was the Presidential nominee for the Republican Party just eight years ago, said that Trump “bears responsibility” for the riot. A CNN survey found that President Trump’s approval rating is currently the lowest it has been during his entire term, suggesting that many Americans believe he is at fault. Some of my friends who at one point strongly supported President Trump are now glad that Biden won the election. The current chaos and violence as a result of President Trump’s actions have even caused some of his closest allies to turn against him, including Senate Majority Leader Mitch McConnell (R-K.Y.). I did not think I would ever listen to McConnell speak and agree with practically every word he said.

I have long known President Trump is capable and willing to incite violence, and so have many members of Congress. Members of Congress who are President Trump’s longtime critics have seen this past few weeks as an opportunity to get rid of Trump for good. Speaker of the House Nancy Pelosi (D-C.A.) announced just days after the attack that Democrats were moving forward with impeachment. Trump was officially impeached by the Democratic-controlled House for the second time on Wednesday, January 13. The impeachment trial now moves to the Senate, where a two-thirds supermajority is needed to convict Trump. In the House, just ten Republican representatives voted in favor of impeachment, an indicator that much of the Republican Party is not in favor of impeachment. In order for Trump to be convicted by the Senate, many Republicans would have to vote to convict, which does not look likely based on the way the House voted on Trump’s impeachment.

There are also some arguments to consider for why impeachment may not be the best route. Senator McConnell sent out a memo that explained that the impeachment trial would have to occur after Biden’s inauguration. Even if Senators vote to remove President Trump from office, Biden would already be inaugurated as the 46th President, rendering little-to-no short-term gain. Nonetheless, voting to symbolically remove Trump from office would set the precedent that violating the law and constitution while in office, even at the end of a term, has its respective consequences. For example, if impeached, President Trump would not receive an annual pension worth hundreds of thousands of dollars, receive access to health insurance, and would never be able to run for office again. These perks, which are all guaranteed to a President by the Former Presidents Act, would no longer be granted to Trump. What precedent would be set if after President Trump has undermined democracy, violated the Constitution, and prompted an attack on the walls of Congress, Congress voted to acquit him and grant him those benefits? While President Trump will have Secret Service protection for the rest of his life whether or not he is convicted, his loss of other post-term benefits is a good reason to impeach him.

Some argue that President Trump’s impeachment could draw attention away from President-elect Joe Biden’s entrance into the White House, shifting the nation’s attention to dwelling on the past rather than focusing on the future. President Trump’s impeachment, however, has implications for decades to come. As previously noted, precedent is important in this situation, as future presidents could determine that they can violate their oath of office if they are at the end of their term.

While few members of Congress still consider themselves supporters of Trump, few Republicans have publicly committed to voting to remove him from office in an impeachment trial. I believe that actions speak louder than words, and if Republican Senators vote to acquit President Trump, they will be validating his actions, setting a bad precedent, and violating their oath of office. For Senate Republicans to prove they really have moved on from President Trump and do not identify with his violent, illegal, and unconstitutional behavior, they must vote to convict when his impeachment trial occurs.