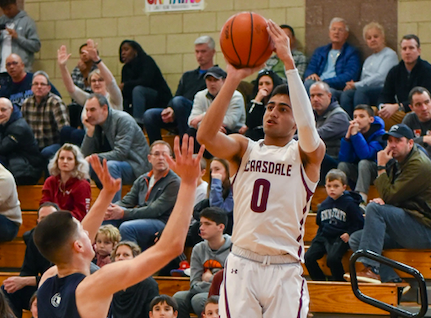 Jayshen Saigal, a Senior at SHS, recently committed to Lehigh University to play Basketball. Jayshen began playing basketball when he was five and has loved the sport ever since. “When I was younger, I always watched and played basketball with my family and that’s how I came to love it. I like playing basketball because I love competing and forming bonds with my teammates and coaches” exclaimed Saigal ‘20.

Jayshen played all throughout high school, playing for SHS and Chris Ward Basketball’s AAU team during the Spring. He plays point guard and shooting guard. As a freshman, he started the year on JV and was moved up to the Varsity team for playoffs. During Jayshen’s freshmen year, the Varsity team advanced to the New York State Section 1 Class AA playoffs where they played Mount Vernon in the finals. Jayshen was named captain his junior year and this past season as a senior he averaged 20.8 points, 9.4 rebounds, and 3.3 assists while receiving All Section, All-Conference, and All-League accolades.

Outside of basketball, Jayshen enjoys listening to music, watching tv shows and movies, and eating food. In school, his favorite class is history because he enjoys learning about current events. Additionally, Jayshen enjoys spending time with his family, who has always encouraged his basketball career. “My brother has been my biggest supporter throughout my whole basketball career, always telling me I was the best player on the court,” said Saigal ‘20.

Originally, Jayshen was admitted to Lehigh for academics. Once Jayshen was admitted, his high school coach, Joe Amelio, contacted Lehigh’s coaching staff. The staff said they had open spots on their roster and watched films of Jayshen playing. Lehigh made Jayshen an official offer on February 25. “A day after they made the offer, I told them yes. My brother is a senior at Lehigh University so I have visited many times and just love the school,” exclaimed Saigal ‘20.

“Since the first time I watched college basketball, probably when I was around 7, my dream was to play college basketball. Next year, I know I’m going to need to work my butt off and compete every day with top-level athletes but I am very excited to do so. I would like to thank my whole coaching staff at Scarsdale for helping me make my dream come true” concluded Saigal ‘20.