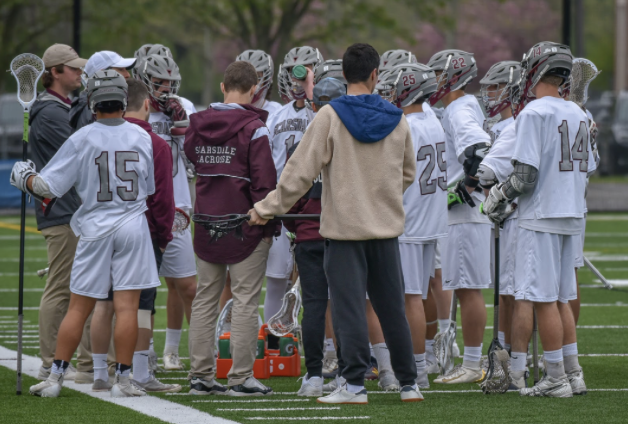 Due to the pandemic, spring sports are unlikely to happen. If school does re-open, coaches will try to salvage as much of the season they can; however, a ‘normal’ season is doubtful. (Jon Thaler Photography)

Due to the pandemic, spring sports are unlikely to happen. If school does re-open, coaches will try to salvage as much of the season they can; however, a ‘normal’ season is doubtful.

The outbreak of coronavirus has not only halted school and given rise to distance learning, but it has also put the spring sports season in jeopardy. Athletes have expressed disappointment that they may not be able to compete in a sport this spring. This especially comes to the dismay of graduating seniors, as they potentially could lose the opportunity to compete in their final season of eligibility in high school sports. “It [potentially not having a final lacrosse season] is devastating because I never could’ve imagined already playing my last game of lacrosse, my last time really picking up a stick, which is crazy considering I have been playing since second grade,” remarked Riley Schneider ’20. “Now my last season is not looking very likely, something I have been looking forward to for my entire lacrosse career, that has been taken away from me,” he concluded.

Currently, as a result of social distancing, the conditions are not safe for practices or pre-season training, and the final decision is in the hands of the state. There is a mandated number of practices and preseason training sessions that are required prior to the start of the season, meaning an intramural sports season seems to be the most viable option at the moment. “Sports are governed by the section, so the good news and bad news, is that we are all operating in a county-wide decision-making process where all the districts will be opening and closing together,” explained SHS Principal Kenneth Bonamo. “Which is to say that, we won’t miss out on a season that other schools are participating in, we’re all going to be in or out,” he added.

Many athletes have dedicated significant time to their sport during the offseason, and it is particularly discouraging to see their hard work wasted. Jason Gans ’22 has been training hard the past year to prepare for another tennis season at the top level, and he is especially upset by the fact that there may be no season at all. “I was expecting a great season both for myself and for the team. I put in a lot of time and I feel like my game has gotten much stronger, and I was expecting a successful season,” Gans noted. “The whole team was working hard for the season, and we thought that we were the favorites to win the section this year. All of our top players were coming back to the team and we were anticipating a great run,” he added.

An intramural season would consist of teams participating in friendly games against other schools, which would result in the negation of a post-season (playoffs and state championships). In an ideal world, a normal season would ensue, although the rapid spread of COVID-19 is continuously diminishing the probability of a regular season with playoffs.  “I would like the idea of having an intramural season. It is definitely hard, but it would be great because I am going to miss the comradery of the lacrosse team, and anyway we can still have that would be great,” noted Schneider. “I just hope that all the boys want to play intramural so that we can feel the team, and so other schools could feel the team. We really don’t know when we are going back, so there is really no set time table for this,” he said.

If school were to re-open, coaches would at least try to salvage some competition in an intramural league. “We obviously have to consider the ability to bring students together in contact sports in close proximity,” commented Bonamo. “We’re not allowed to do that right now according to the Department of Health and CDC guidelines, so I would say that until those are lifted, it’s not a possibility, as soon as they are and we’re back, I think we will salvage whatever we can,” he concluded.

The professional sports world has taken a massive blow, with major leagues expected to be shut down for several more months. According to SHS Athletic Director Raymondo Pappalardi, “the way professional sports have handled COVID-19 has indirectly influenced decisions about youth sports. Though no schools have directly used professional sports as examples or as motivation for decisions, the severity of canceling competitive professional seasons highlighted the seriousness of the issue,” he disclosed.

Assuming the severity of the pandemic minimizes and schools can re-open, there is still hope for the season to commence. As tryouts and practices for spring sports were supposed to recently occur, upperclassmen and coaches have highlighted that athletes must stay in shape and prepare for anything. “Of course [if the season were to happen] there is the expectation that everyone is working out right now. Since we would be getting a late start, everyone should be coming in conditioned and prepared,” Schneider explained. “In the offseason right now everyone is bored and doesn’t have much to do—we are encouraging everyone to get outside and pick up their sticks so when we get back into the season we will be ready to play and win games,” he concluded.