The Knicks Are Back in the Playoffs…Who Is Taking It All? 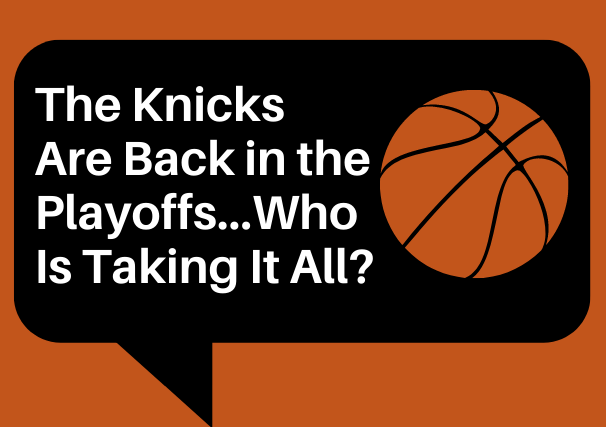 After eight long years, the Knicks are finally back in the playoffs. The question is... who will win it all?

After a rough beginning to the season amidst the coronavirus pandemic, the NBA playoffs have finally begun. With nearly 80% of players vaccinated according to commissioner Adam Silver, this year’s playoffs should be as close to normal as possible considering the circumstances. Similarly, with vaccinations rising and cases dropping throughout the entire country, teams are now allowing thousands of fans to be in the arenas, which gives the intensity of the playoffs the perfect touch. Here is a preview of what to expect as the playoffs begin:

The Eastern Conference playoff matchups are exciting and thrilling. First, we have the two-seed Brooklyn Nets facing off against the seven-seed Boston Celtics. According to many experts, the Brooklyn Nets have the most lethal offense in the league, featuring Kevin Durant, James Harden, and Kyrie Irving. This unstoppable big-three will be entertaining to watch throughout the playoffs as they have big expectations; however, disregarding their powerful offense, most eyes will be on their dreadful defense. They have the eighth-worst defense in the league, so Jayson Tatum alongside the Boston Celtics will look to capitalize on the offensive side of the floor. This season, Tatum averaged 26 points, seven rebounds, and four assists. “With [Tatum’s] sidekick, Jaylen Brown, unfortunately obtaining a season-ending injury before the playoffs; [Tatum] will be forced to have a perfect series to keep the Celtics alive,” stated Luke Tepper ‘23. This series might come down to the wire if the Celtics defense can stop the lethal Brooklyn Nets offense.

Next, the three-seed Milwaukee Bucks face off against the six-seed Miami Heat. This exciting matchup will be a rematch of last season’s Conference Semifinals, where the Heat was able to knock off the Bucks in only five games. This series features talented Bucks players including two-time MVP Giannis Antetokounmpo, Jrue Holiday, and Eric Bledsoe. The Heat come in with a stacked lineup including Jimmy Butler, Bam Adebayo, Duncan Robinson, and Tyler Herro. “I believe that if the Heat can play to the best of their ability, they would have a strong chance to repeat their playoff run from last season. It will be up to players such as Bam Adebayo to step up their offensive game and play to their full potential,” stated Adrian Duval ‘22.
Last, we have the first seed Philadelphia 76ers against the eight seed Washington Wizards. This matchup features loads of star talent, including MVP winner and finalist Russell Westbrook and Joel Embiid, respectively, and All-Stars Bradley Beal and Ben Simmons. Westbrook and Embiid have a history of disagreements, so there is an extra layer of competitiveness to this series. These teams had highly competitive matchups in the regular season, and we can all hope that continues in the playoffs.

As for the Western Conference, the matchups are also exhilarating. In the first seed vs. eighth seed series, we have the Utah Jazz, who finished with the best record in the NBA, taking on the Memphis Grizzlies, the winner of the Western Play-In tournament. These games will feature the matchup of explosive guards Donovan Mitchell and Ja Morant, who are known for their powerful dunks and creative finishing.

Moving on, we have what could be the most competitive series of them all: the seventh-seed Lakers versus the second-seed Suns. To the average fan, seeing the Lakers in the 7th spot may be confusing. The defending champs had an injury bug this season, with both their All-NBA caliber players LeBron James and Anthony Davis missing time with various injuries. The Phoenix Suns are arguably the NBA’s most improved team, finishing with the second-best record after missing the playoffs last season. This series will be incredibly fun to watch, and it will be interesting to see how the veterans (Chris Paul of the Suns and the aforementioned Davis and LeBron) battle with inexperienced players such as Devin Booker and DeAndre Ayton of Phoenix and Talen Horten-Tucker of the Lakers.

Furthermore, we have the three seed Denver Nuggets taking on the 6th seeded Portland Trail Blazers. This series is not without an asterisk as star point guard Jamal Murray will not take part due to a torn ACL. These games will still be packed with studs, as Damian Lillard, Nikola Jokic, C.J. McCollum, and Michael Porter Jr. remain healthy and ready to compete. If Murray were healthy, Denver would have been a heavy favorite; without him, it’s anyone’s game. Finally, we have the Dallas Mavericks taking on the Los Angeles Clippers in a rematch series. The Clippers defeated the Mavs in the 2020 playoffs in six games, but both teams have undergone tremendous changes. L.A. fired head coach Doc Rivers and replaced him with Tyronn Lue; Dallas traded sharpshooter Seth Curry for a tenacious defender in Josh Richardson. The main pieces on each side remain Kawhi Leonard and Paul George for L.A., and Luka Doncic and Kristaps Porzingis for Dallas. This series will be particularly interesting as both teams should be familiar with the play style of the other.

It would be malpractice to not include the improvement of the hometown favorite New York Knicks. Last season, the Knicks finished 12th place in the Eastern Conference. Ending the season with a poor record, 21-45, the Knicks were eager to make a comeback and prove themselves to the world. After firing their previous head coach David Fizdale, general manager Scott Perry acquired current head coach Tom Thibodeau. This off-season acquisition by the New York Knicks was the reason the Knicks are currently the fourth seed heading into the playoffs. However, the team’s leader, All-Star Julius Randle, has been the most outstanding player for the team this year. Randle is averaging 24 points, 10 rebounds, and six assists heading into the playoffs this season. Randle has improved significantly throughout the season as last season his three-point percentage was 28% and this season was 42%. “It is clear [Randle] is more confident this year; he is not afraid to make big plays and has gained trust in his teammates. I believe that [Randle] has truly developed into his role as a leader on the team,” stated Jonathan Gates ‘23. Not only has Julius Randle been the main factor this season for the Knicks, but sophomore RJ Barrett has simultaneously helped push the Knicks to the fourth seed this season. Barrett averaged 18 points, six rebounds, and three assists this season. The Knicks finished this season 41-31, with a home-court advantage heading into the playoffs against the fifth seed, Atlanta Hawks. All of New York has high expectations for the Knickerbockers over the next couple of months entering their first playoff game in eight years. “I expect the Knicks to defeat the Hawks in the first round; however, the competition is too skilled for the Knicks to bring home the championship trophy,” stated Gates.