The Ancient Greeks Teach Us How to Survive Quarantine 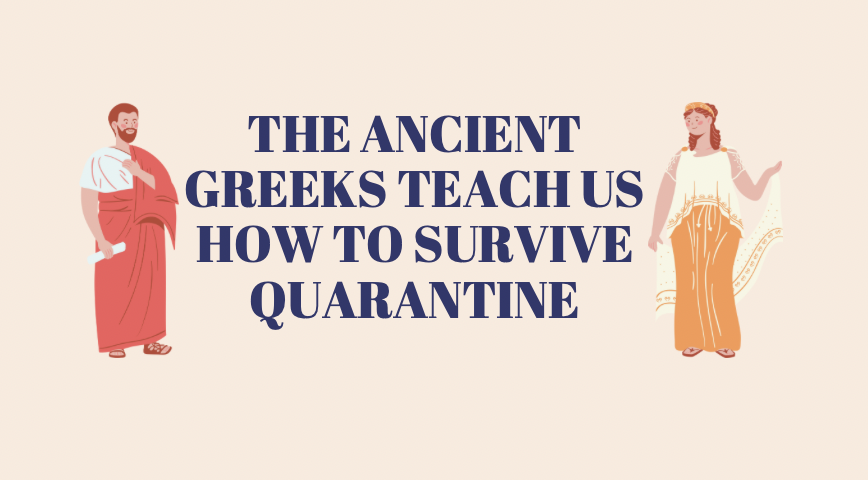 Stoicism, a philosophy of personal ethics developed in Athens, serves as an outlet to allowing oneself to blossom.

Over the course of time, humanity has endured a lot. Whether it be war, famine, or plague—if it can be labeled as “bad,” then humans have undoubtedly experienced it. So now, humanity has a new challenge that’s become rather apparent in just a few months: the onset of the COVID-19 pandemic. And, not unlike the wars, famines, or plagues of eras past, people are terrified. Yet philosophers and scholars from millennia ago seem to have already figured out how to deal with their deepest anxieties under the school of thought known as Stoicism.

Like many of the other philosophies developed in Greece and Rome during the Hellenistic period (323 BCE – 30 BCE), the most basic tenet of Stoicism is to live a life based on virtue or morality. However, Stoicism starts to branch off from ideologies such as Cynicism and Epicureanism due to its emphasis on distinguishing what can and can’t be controlled.

Though it may come across as morbid, Stoics acknowledge that to a certain point, they can’t control everything in their lives. Outside of one’s own thoughts, actions, and behavior, there is really nothing that one can change. Take final exams, for instance. Someone can consciously make the decision to study and prepare well for a test, but beyond that, their grade is up to whoever corrects it.

Perhaps this could be seen through a negative lens. After all, it seems to highlight how powerless people are in the grand scheme of things. While this argument is valid, Stoics focus on the idea that individuals are the only ones responsible for their lives and should accept whatever may exist outside of their influence. One can find happiness in knowing that they have tried their best and can deal with any outcome. Epictetus, one of the most notable ancient Greek Stoics, summarized how people should approach that which they cannot alter: “Make the best use of what is in your power, and take the rest as it happens. Some things are up to us and some things are not up to us.”

Another Stoic idea that is especially pertinent is that in response to an unexpected event, one should strive to embrace it instead of just acknowledging it. Using the same final exam analogy, someone could receive a lower grade than desired. Obviously it feels awful in the moment, but there is still much to gather from this seemingly detrimental situation. Of course, teachers will give the classic learn-from-your-mistakes spiel, but there is actually a lot of truth in that. Failures don’t make someone incompetent. It’s only until someone decides to do nothing about their failures that they become incompetent. In any given circumstance, it is pivotal to find opportunity. Granted, more favorable conditions tend to yield more favorable opportunities, yet the point is to perceive negativity in a new light.

With all of that being said, the predicament that the world currently finds itself in is one of unprecedented magnitude. Due to how far modern medicine has advanced, it seems bizarre that something like this would ever happen. Now, more than ever, Stoic values are relevant to living a healthy life. Welcoming the unexpected and searching for places to grow as people is necessary to deal with these grim times. And there are already people taking advantage of the “freedom” this pandemic, ironically, has allowed. Although everyone is cautioned to stay inside, connections with family are strengthened, new and interesting hobbies are pursued, and every day where the sun comes out is a blessing. So, Stoicism is not a solution to ending the hysteria behind this quarantine, as realistically, there isn’t one. But Stoicism serves as an outlet that can allow one to truly blossom.