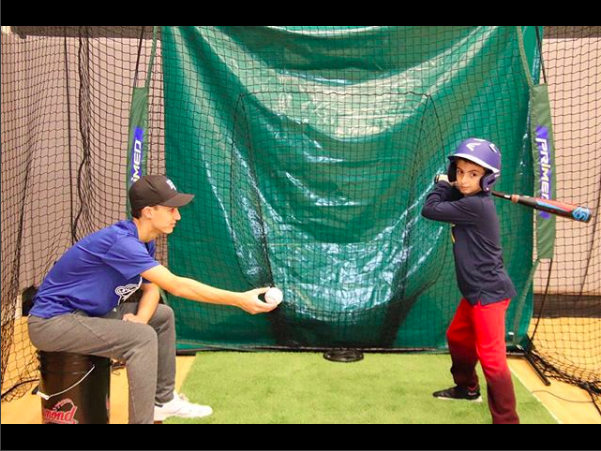 Parky Bondy, President of Talenthood's North Shore Region and a baseball instructor helps a kid with his swing.

In January of 2019, Talenthood, a community-based platform, was launched to connect Scarsdale families with children to high school students who excel in sports, technology, academics, music or creative hobbies for tutoring services. The platform can also connect any resident with a high school age babysitter. Cooper Cohen, a junior at SHS, is the founder and current CEO of Talenthood. “After receiving numerous requests from parents to work with their kids and coach them in soccer, I realized that there were many families with little kids that wanted their kids to improve in different areas, and there were plenty of talented high school students looking for jobs and ways to share their passions. I coupled the two and we had a great response from the Scarsdale community,” said Cooper.

Levi Ring, a junior at SHS, is the current COO of Talenthood. He works alongside Cooper to ensure that the instructors are properly prepared for their lessons. The two make a powerful team and remain determined to make a change. Talenthood completed a whopping four hundred lessons by the end of this January. In addition, Talenthood won the Scarsdale High School Social Entrepreneurship Competition this past November, receiving a grant for $2,500.

Cohen has had an interest in entrepreneurship prior to the fruition of Talenthood, which originally served as his inspiration to found the business. “Entrepreneurship is a passion of mine, and I have had many businesses throughout my life, from customizing ELITE socks, selling sneakers, running kids’ birthday parties, and now Talenthood,” Cohen said. “I love communicating with clients and instructors, marketing and promoting the business, handling sales and finances and working with the charities and organizations that we partnered with. I have a great team that I work with, Levi Ring, Ben Assa, Ryan Silberfein and Justine Karp, who all have had large impacts on the company’s success,” he added.

The platform allows high school students to teach their passions to the younger generation and help them to improve in specific areas. “Catching for a young pitcher reminded me of when I was younger,” said Alex McCarthy ‘22, a softball instructor for Talenthood. “I used to work as hard as I could to get better and better. Seeing these girls do the same thing warmed my heart. I could see they were striving to reach their full potential. I saw improvement with every swing. Most importantly, they always had a smile on their face.”

The Talenthood platform benefits Scarsdale residents and emphasizes philanthropy. Twenty-five percent of all gross profits are donated to several charities. At the end of each lesson, the child chooses from a list of predetermined charities to which they would like to donate a portion of the lessons payment. Some of these charities include Children’s Hope Chest, The White Plains Hospital Foundation and The Play on Play Foundation. “We do this [allow the children to decide which charities to donate to] so that the kids feel empowered, and we hope they are inspired to continue their charity work in other ways. We also partnered with several other organizations that we offer opportunities to our instructors to volunteer their time with,” explained Cohen.

Along with learning new skills, the children learn the importance of helping others. “I really enjoyed working with younger kids and seeing their confidence grow over the course of the many lessons,” continued Alex McCarthy. “I felt as though I was helping create a new generation of athletes. But most importantly, I felt that I was teaching the children the important lesson of giving back.”

Just this past year, the platform expanded to Highland Park, Illinois. The President of the North Shore region is Parker Bondy, a sophomore at Highland Park High. The platform in Illinois offers similar activity areas and shares the same motto of “big kids helping little kids.” Expanding beyond Scarsdale has created new opportunities for Talenthood, such as being featured in The North Shore Weekend newspaper.

The program has recently implemented a mobile app that can be downloaded to book instructors directly. Essentially, parents can use the app to read the instructor’s bios and choose which instructor fits their child’s needs. Then, they can message the instructor and schedule a lesson with them. After the lesson, the parent pays Talenthood using Venmo, and the instructor is sent their cut of the lesson payment. The rest of the money goes to charity and to Talenthood expenses, and what is left over is Talenthood’s profit. There is also a website that lists the different prices and offers more about the goal of the platform.