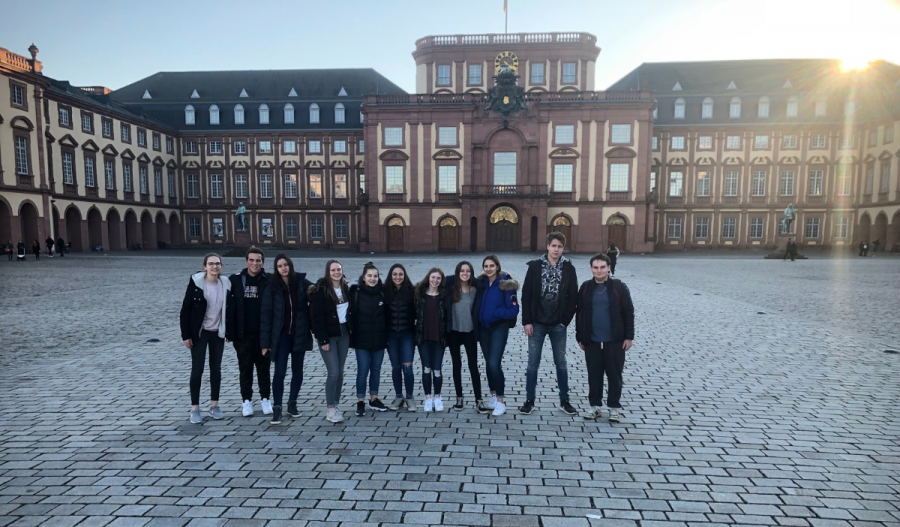 This past February break, Scarsdale High School offered a German Exchange program to all SHS students, which proved to be a major success. Five students from SHS traveled to Germany to experience the daily life and activities of a different culture.  The students were accompanied by SHS social studies teachers Brendan Lee and  Carlos Bedoya. Each student was paired with a family and spent each night at the family’s home. The students visited several tourist attractions in Germany and France and attended school with their exchange partners.

The flight to Germany was approximately six hours and forty-five minutes long. The SHS students landed in Frankfurt, Germany, and they headed directly to Heidelberg, Germany, a town along the Neckar River in South Germany.

On the first full day of the trip, the students went directly to the host school, the Elisabeth Von Thadden School in Heidelberg, to meet and to have lunch with tenth-grade students. They talked with the teachers about several topics, including the refugee situation in Germany. The students walked around the school and were taken on a tour of Heidelberg after school by their German student hosts. The school was different from SHS in terms of its physical layout and design. “The school is on more of a campus with multiple buildings, not just one big building,” said Michael Emmerman ‘22.

On the second day of the trip, a small group hiked to the top of Saints Mountain to see the ruins of the Monastery of St. Michael (Michaelskloster) that was built in 1023. The group then went to the city of Stuttgart to eat lunch and to walk around. In addition, the students explored the Mercedes-Benz Museum, the Staatsgalerie Stuttgart, and had time to walk around and shop.

On that first weekend of the trip, all of the SHS students, along with their German exchange partners, had a combined sleepover. “This part of the trip was a very good bonding experience for everyone in the beginning of the trip. Everyone became close and really got to know one another,” described Emmerman ‘22.

Another highlight of the trip was exploring Neckarelz, a work camp from World War II. The students saw the history of the camp and how it used to be a school prior to World War II. Neckarelz has now been transformed back into a school again.

Following the trip to Neckarelz, the students traveled to Sinti Roma to visit the Sinti and Roma Museum. The museum serves as a memorial for people killed by the National Socialist Party, or Nazi Party, during the Holocaust, specifically for the group often referred to as “Gypsies” (Germans no longer use this word as it is considered insulting). “It was a sad museum, and is, in fact, the only one in the world that pays tribute to Gypsies who were victimized during World War II,” explained Emmerman ‘22. Other students also found the museum to be very interesting. “The most interesting part of the trip was the Sinti and Roma Museum. I think it was a great experience to learn about the victimized people,” reflected Molly Flicker ‘22. “When most people think of the Holocaust, they think of the terrible atrocities that were done to the Jewish people and of the numerous museums and memorials that commemorate all of these tragic deaths. However, what many people do not realize is that there were others who were put to death and who suffered during the Holocaust, who are now being honored in the Sinti and Roma museum,” added Flicker ‘22.

Another highlight of the trip was visiting the French city of Strasbourg. The students took the bullet train to Strasbourg, walked around the city, and went to a cathedral to see a 300-year-old mechanical clock. After viewing many historic sights, the students had free time and participated in a scavenger hunt throughout the city.

“The highlight of my trip was going to Strasbourg, France because there were more freedom and time for us to explore. Strasbourg was similar to Germany because it used to be part of Germany, and a lot of people speak German there,” said Emmerman ‘22.

The next day, the SHS students went back to the school, met with people who work with refugees, and discussed the similarities and differences in how to deal with refugees in Germany and in the United States. The remainder of the day was free and, at night, there was a goodbye party at the school run by all of the parents. The food that was served was all German home-cooked food, such as mini hamburgers with onions, mashed potatoes, German soup, schnitzel, and sausages.

On the last day of the trip, a small group of students went ice skating, and then they went back to a German student’s house to say their final goodbyes before their return to New York.

This goodbye is certainly not permanent, as the German students are coming to SHS for the second part of the exchange program on March 9th. The majority of the trip itinerary is based in New York City, and the Scarsdale families have the weekend free to do whatever activities they desire with their visiting students. The same person an SHS student stayed with, in Germany, will be staying with him or her in Scarsdale. “When my German exchange student comes to New York, I am looking forward to showing her what everyday life is like living in America. She is going to attend school some days, and I am excited for her to have the same revelations I had when I went to her school,” said Flicker ‘22. “It is such a cool experience seeing the similarities and differences in places that are so far away from each other. I also can’t wait to introduce her to my family and friends so they can hear what life is like across the Atlantic in Germany,” she concluded.