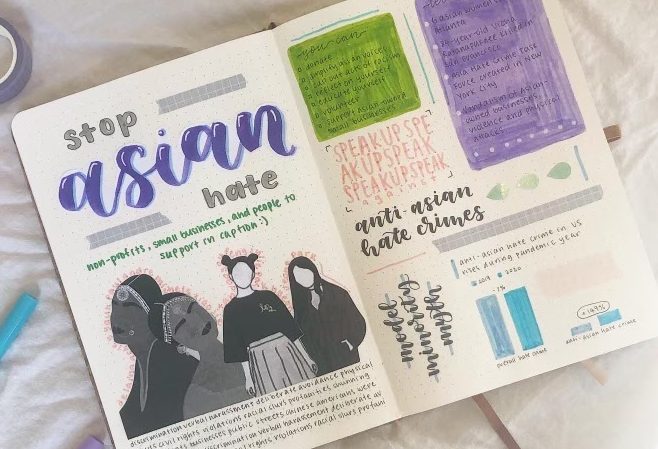 Social media has been at the forefront of modern day activism due to its accessibility and wide user base.

For months, headlines and hashtags have been telling the same story: violence against Asian Americans has been on the rise. On March 16th, suspect Robert Aaron Long opened fire in multiple Atlanta spas, leaving 6 Asian American women dead and the nation reeling in shock. The suspect, a 21-year-old white male, was described to be having a “bad day” by police. Since then, many have been accusing the Atlanta police and other sympathizers of blatant racism — bad moods do not justify murder.

The trend of trying to excuse white individuals of targeted hate crimes reveals the underlying racism that has been present in the U.S. since the beginning. “The very ‘founding’ of America with Columbus was basically…on racist intents. The history is there…and so that stuff made its way into laws, the constitution. It was literally legal to enslave people […]” explained Karen Lee ’21, one of the co-founders of ACE, the Asian Conscientization and Empowerment Club (@ace_clubandpodcast).

In the present day, activists have taken to the streets and social media platforms to spread awareness of the daily microaggressions and discrimination marginalized groups face, the violent acts of hate, and how people should address them. Recently, many news outlets and people have directed their attention towards the racism that Asian Americans and Pacific Islanders (AAPI) face concerning the spread of COVID-19. “The racism against Asians is just another symptom of the ignorance and insecurity that has always plagued society. Unfortunately, there have always been those that, for whatever reason, [feel they] need to blame others…Discrimination has existed for some time…just check history,” explained SHS computer science teacher Greg Leong.

Hate crimes are now taking place frighteningly close to Scarsdale. A man aggressively assaulted and attacked an elderly Asian American woman in White Plains a few weeks ago, hitting her so that she passed out. “I saw on the news that an elderly Asian woman was assaulted in front of the Westchester Mall, which is not even 10 minutes away from my house. She was punched, knocked unconscious, and spat on. It was really disgusting to read about, and it made me worried for my grandma’s safety because she lives with me,” said the other co-founder of ACE Vivian Guo ‘21.

For activist movements in this era, social media has had both positive and negative effects. Social media can quickly spread information through its user base and is widely accessible for reporting statistics and incidents. The potential for fast coverage was made clear in the summer of 2020 when a gruesome video of George Floyd’s strangulation went viral and sparked major movements all over the country that are still relevant today. However, with the potential for positive change also comes the potential for negative change. A direct cause of sharing explicit media such as the murder of George Floyd or harm of another individual can severely desensitize viewers to the gratuitous violence that minorities face. “The more we see people getting killed or suffocated…we’re going to think it is almost normal to see all this violence every single day,” elaborated Maggie Peng ’22. Social media can also foster echo chambers of racist individuals who become increasingly more extreme and stubborn.

As of now, the attention on social media has shifted towards Asians. Every day, there seems to be a new post or new headline about an Asian person, generally either elderly or woman, being attacked or being the target of derogatory slurs. It’s been disheartening for the AAPI community to see how many have been victims of racism on a wide scale ranging from microaggressions to brutal attacks. In response, many have been organizing protests and rallies, spreading awareness on social media, and trending hashtags like #stopasianhate and #hateisavirus. Other media platforms like Spotify have even promoted awareness on the topic to reflect the social media outburst with a collection of podcasts and playlists.

For many, the recent movement for Asian Americans feels hauntingly similar to the BLM movement for African Americans in the summer, a fleeting trend of performative activism that desensitized Americans and caused few reforms. “Racism and hate crimes need to be addressed always, and it’s not a long-lasting change if we only talk about it when people are assaulted, attacked, and killed. I think talking with one another, raising awareness, and donations are helpful regardless of when they are given, but I am frustrated when I see people whose entire activism consists solely of sharing posts on Instagram,” explained Guo.

Despite the possibility of the recent awareness just being a trend, it’s still imperative that we utilize this time to inform and educate others. “I think it’s more productive to change the conversation so that we don’t focus on the bad so much […] but rather the people who are doing the good,” explained Lee.

What you can do to help

Here are some compilations of the links that we have found for people to help educate themselves about Asian American experiences as well as ways to help support/donate to these organizations. No matter what happens, only individual change can cause a group change; only when we all contribute can we create a shift in attitude towards Asians and all other minorities. Change starts small.

NOTICE: There will be a vigil for the victims of the Atlanta shooting at Chase Park near Scarsdale Village on Saturday, March 27, 2021 1-3pm.

https://www.cranes4change.com/donate-for-earrings – A list of sites to donate to (Asian owned businesses in Chinatown) in exchange for earrings