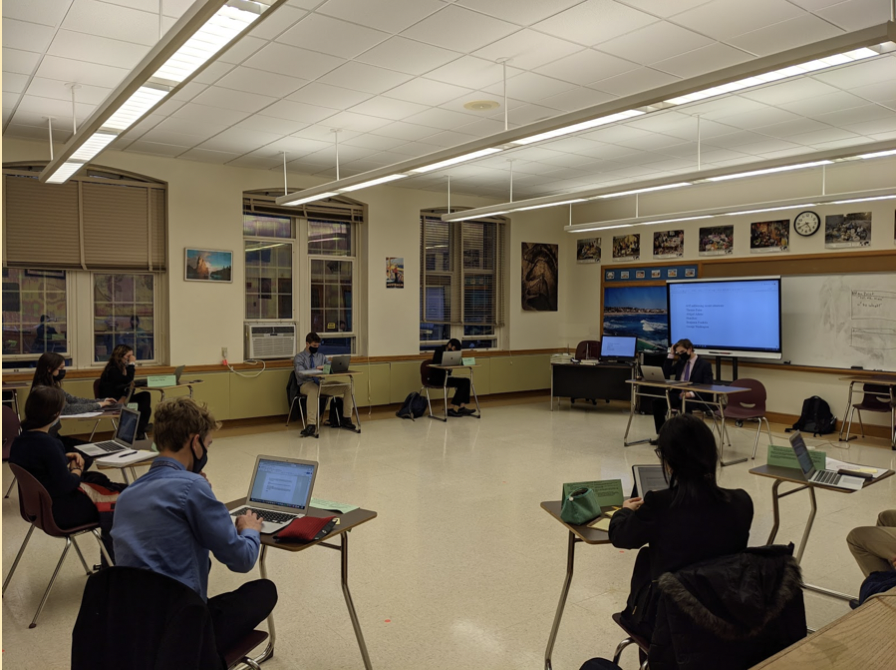 Model UN club members were able to work around the obstacles and hold a conference on the American Revolution.

With the pandemic forcing the usual conferences in Philadelphia and at Princeton to be canceled, the high school’s Model United Nations club had to get creative and improvise a fun event for their members.

They decided to move up the Scarsdale Model United Nations conference (SHSMUN), usually held for just Scarsdale students at the end of the year to now. In late November after school, the club was able to hold an in-person makeshift conference safely distanced and masked in which they simulated the American Revolution. Each club-member was given a role to play as they paralleled the Revolutionary War from 1775 on. The two different sides strategized their war efforts, taking different pieces of land, and planning new battles. It took a lot of work to put together, as the club’s officers were tasked with combining both A and B cohorts and in-person and virtual students. At a normal conference, you would often see ten kids huddled around a notebook. As this is obviously not allowed this year, the club had to adapt and make a Google Classroom page in order to allow students to share work. But even with all these hurdles to cross, the conference was a relative success. “Once we were able to get around all of these obstacles the conference ended up going extremely well. As a chair, I was in the room the entire time and it felt as close to a normal year as we could get,” said Lindsey Smith ’22.

Although they were able to still hold a club event, it was without the fun and excitement that comes on the overnights the club usually has. Usually, the club is able to forge bonds at club dinners and at other activities. “MUN in general relies heavily on inter-student connection and the ability to work together. We wanted to make a conference that could most closely resemble a typical year, but it was tough,” said Smith. Unfortunately, they weren’t able to hold any out of school activities this year. “It was definitely different as everyone was socially distanced and sad that we couldn’t have an overnight,” said Benji Miller ’22. “However,” he added, “it was still a lot of fun to be able to recreate and change history as we did. In the times we are living in, everyone has to make sacrifices and with the circumstances, we’re in I think they did a really good job trying to recreate the environment we would normally have at a conference.” he said. For returning members, the opportunity to be back in a semi-normal MUN environment helped them feel a sense of normalcy in these trying times. “Although it was different, it was great to be back to some type of normal for a club we all love,” said Smith.

Like most other things these days, the Model UN club’s officers had to work past a lot of barriers in order to make the conference possible and safe, but it still gave the club members a fun simulation to work on.