Movie Review: Shang-Chi and the Legend of Ten Rings 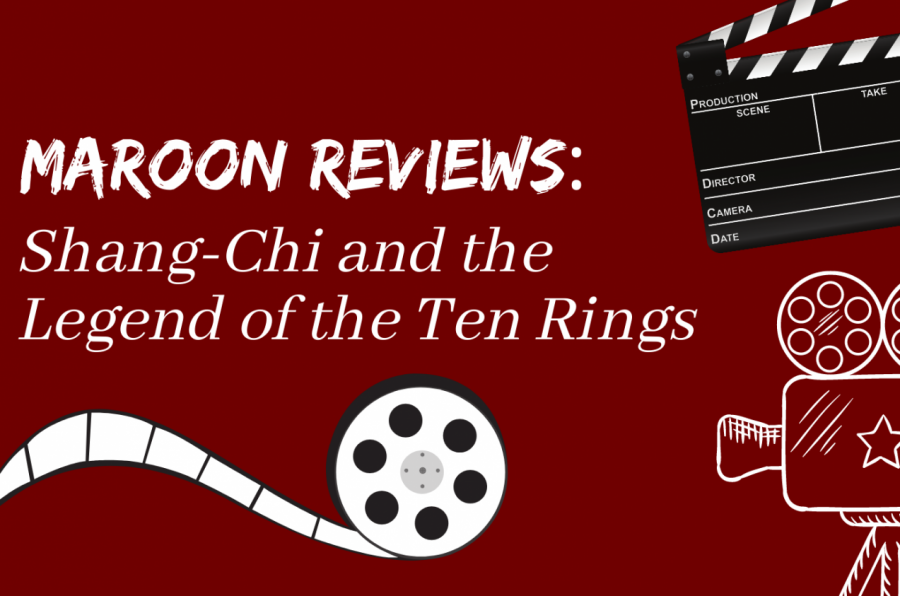 Maroon reviews Marvel Studios' "Shang-Chi and The Legend of The Ten Rings," offering our opinions on its premiere.

Complete with armrest-gripping action sequences and glowing magic weapons, Shang-Chi and the Legend of the Ten Rings, Marvel’s new superhero movie, was everything to be expected and more. The movie follows the story of Shaun (Shang), who is forced to confront his past when his father hunts him down in a desperate effort to bring his wife back to their family. Despite the rehash of Awkwafina as yet another sassy comedic sidekick, Shang-Chi was a welcome addition to the cinematic universe. For starters, the martial-arts choreography set new standards for action movies to come. The visuals were stunning and the special effects were awe inspiring. However, even though the movie was thoroughly enjoyable, it is by no means a cinematic masterpiece. Plot holes and familial tensions that were never fully resolved left the viewer feeling a bit unsettled, and the lack of chemistry between the actors made some scenes feel awkward.

Following a rise in Asian activism and the success of Crazy Rich Asians, Disney has released Mulan, Raya, and now Shang-Chi, in just a few short years. Each features a predominantly Asian cast, and caters the big screen to a more diverse audience. The integration of Asian culture in this movie was also well received as it made Chinese people feel more connected to Shang-Chi. The first few minutes of the movie is almost entirely spoken in Mandarin, a surprising but significant way to show the writers were committed to making the Asian representation as realistic and accurate as possible. Scenes regarding the daily life of Shang-Chi and Katy also touched on aspects of Asian-American families. But in addition to its role in Asian activism, Shang-Chi also featured a new take on women’s roles in Hollywood. While many Marvel movies—I’m looking at you, Iron-Man—tend to sexualize the female characters, Shang-Chi was an appreciated break from supermodel girlfriends and sexual tensions at the workplace. Instead, it chose to focus more screen-time on the badass persona, for both male and female personalities.

At the core of every great superhero movie is a great villain, and Wenwu, the original master of the Ten Rings and Shang’s father (Tony Leung), certainly filled that need. His hurting was almost tangible through the screen—a broken man trying to regain the one person who thought he could change made for an incredibly complex character. The only thing Wenwu wanted was to have his family back, and it’s easy to sympathize with him, making Shang-Chi’s eventual victory that much more bittersweet. Wenwu led to conflicting feelings that took away from the sense of justice, for better or for worse. On the other hand, a brilliant and charismatic villain was reduced to nothing but a delusional husband by the lackluster attempts to smooth over the plot holes. Unfortunately, it seemed hard to believe that Wenwu had lived for thousands of years with the power of the Ten Rings, yet was still tricked by a voice in his head telling him to save his dead wife. Nevertheless, Wenwu’s passion and drive, as well as impressive acting, makes the audience feel sympathetic, desperate, and even leaves them on the edge of their seats.

But even while supporting fresh faces and new gender archetypes, Shang-Chi seemingly fell into every cliche possible. At times in the movie theater, I could almost predict the script word-for-word. After all, phrases like “that was the first time I met your father” and “I’m not letting you go again” can be identified in at least half a dozen movies each. Worse, plot devices such as the falling-off-a-dragon scene between Xialing and Shang were easily seen as an attempt at bonding the characters towards the end of the movie. Even though the plot was ultimately a satisfying story, it didn’t leave a lasting impression of originality, rather, the visuals seemed to take precedence over the storyline.

In the end, Shang-Chi was a good movie in the entertainment factor, but it didn’t leave any lasting impression on viewers. Frankly, the main appeal of this movie is the Asian cast, and while diversity is extremely important in the film industry, it should not come at the expense of the film itself. In spite of the various criticisms about the storytelling and plot, Shang-Chi is still a movie worth watching. The experience of seeing it on the big screen is truly special, and you may even find yourself wanting to learn Kung Fu after the epic fight sequences and beautiful choreography.