Marvel’s Eternals: A Super Film or A Super Fail? 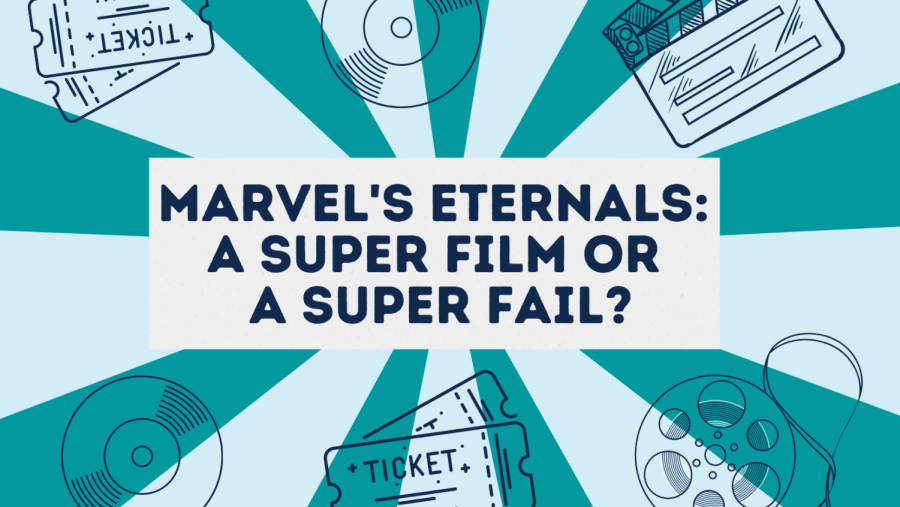 Eternals received the lowest Rotten Tomatoes score of any Marvel film, is it deserved?

Following the release of Marvel’s blockbuster film Avengers: Endgame in 2019 and the culmination of the Marvel Cinematic Universe’s “Phase Three,” several new television shows and films have been released as the pandemic continues to subside. After the relatively successful release of Black Widow and Shang Chi and the Legend of the Ten Rings over the summer, Eternals was released on November 5, marking an entry for several important new MCU figures.

Academy Award winner Chloé Zhao was tasked with writing and directing the film, including casting a fair share of A-listers such as Angelina Jolie, Kumail Nanjiani, Selma Hayek, Gemma Chan, and Richard Madden. These stars, along with a few less familiar faces, constituted the Eternals, ancient superpowered beings charged with protecting humans from the Deviants, essentially giant alien monsters. In the films, the Eternals previously eliminated all the Deviants from the Earth and began to live as normal humans; however, they soon learned that something even more fatal than the Deviants may be on its way, causing them question why they are truly on Earth.

As all Marvel films do, Eternals provided great action scenes and memorable one-liners. However, at some points, it felt like the film bit off more than it could chew. There are ten Eternals, and unless someone religiously read Marvel comics, the average fan probably knew nothing about them while watching the film Introducing all of Eternals, along with several more supporting characters, made it difficult to connect with each individual character and invest in their lives, something that Marvel films normally rely on to build as much suspense as possible. The film also ran for over two and a half hours, which made it hard to stay engaged, especially with so many new characters. Without the strong emotional stakes, the action did not punch as hard as it could have.

It was also evident that the film tried as much as it could to escape from the Marvel “hero’s journey” formula, with far less VFX than usual (albeit still a lot) and no big, bad villain that was marketed as such. However, perhaps Zhao and the other filmmakers did not stray far enough from typical Marvel, as the film would have benefitted from more natural character development instead of just killing off new characters.

However, the film did introduce several likable characters who we are excited to see in future projects. Gemma Chan’s Sersi, who could transform different forms of matter, was compassionate and smart. The real scene-stealers were undoubtedly Barry Keoghan’s mind-manipulator Druig and Lauren Ridloff’s superhuman-fast Makkari—the MCU’s first deaf superhero. Their chemistry was undeniable, and something we hope is explored in future films. Eternals was also one of the most diverse superhero films we’ve seen, showing the MCU’s first gay couple between Eternal Phastos and his husband Ben.

Generally, the film focused on character building and exposition more than an actual plot. While the overall quality suffered a bit as a result, it was almost unavoidable due to the large number of new characters MCU introduced. And, of course, being a Marvel film, the post-credit scenes provided great suspense for what a future film might entail, including a cameo from Eros, Thanos’s brother played by Harry Styles, and Sersi’s boyfriend Dane, played by Kit Harrington, receiving a mysterious blade as a family heirloom; the latter of which left some sons believing the blade was, indeed, the Black Knight’s Ebony Blade. The story of the Eternals is far from over.