Johnson & Johnson Vaccine on Hold in the United States 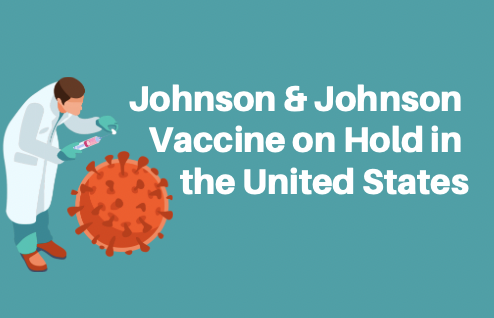 Use of the Johnson & Johnson vaccine has been paused in the United States after reports of blood clotting linked to the J&J vaccine.

On April 13, 2021, the CDC released a statement on the pause of the use of the Johnson & Johnson vaccine. Investigation revealed that severe types of blood clots may have been linked to the use of the Johnson & Johnson vaccine. This case appears to be extremely rare, as only six cases have been reported in the United States out of nearly 7 million J&J doses that have been administered in the United States. The CDC announced that all of these cases emerged in women between the ages of 18 and 48. They had developed a cerebral venous sinus thrombosis, which is a clot that develops in the area of the brain that collects and drains oxygen-depleted blood.

According to Dr. Tom Shimbukuro, the vaccine safety lead for the US Centers for Disease Control and Prevention’s COVID-19 Response Team, five out of the six women experienced headaches as an “initial presenting feature” and symptom. He also mentioned that these symptoms or initial features may not always be clinically significant as they are “largely kind of nonspecific symptoms.” These may include headaches, lethargy, chills, and myalgia. Later on, other defining features may include severe headaches, focal signs, bruising, swelling in the lower extremities, and severe abdominal pain.

For those who have received the J&J vaccine, the CDC and many professors at medical institutions around the US advise people to pay attention to their bodies and be aware of any strange symptoms. They have also advised that those who feel these symptoms within two or three weeks of receiving the J&J vaccine should immediately notify and contact their health care provider as a precautionary measure. Another vaccine that branches off from the J&J vaccine, the AstraZeneca vaccine, also has been reported to be linked to blood clotting, but the details are unclear at the moment. The CDC hopes to find the cause of the blood clots and to begin the redistribution of the Johnson & Johnson vaccine as soon as possible.

In other vaccine news, Pfizer has announced that they are in the process of publishing data that would likely allow those who are between the ages of 12 and 15 to receive the Pfizer vaccine. This means that everyone in middle school and high school will be able to receive the vaccine. More schools will be able to move to a more normal schedule and have more students in school facilities at a time.

In an earlier report on Pfizer’s clinical trial for people between the ages of 12 and 15 on their vaccine, Pfizer Inc. and BioNTech announced that “in participants aged 12-15 years old, BNT162b2 demonstrated 100% efficacy and robust antibody responses, exceeding those reported in a trial of vaccinated 16-25-year-old participants in an earlier analysis, and was well tolerated.” This was the Pfizer vaccine’s status on March 31, 2021. Experts theorize that this data strengthens Pfizer’s case for approval in ages 12-15 and that the Pfizer vaccine will soon be approved by the FDA and be distributed to those age groups in the US.

Currently, Pfizer is looking to get the vaccine approved for 12-15-year-olds as soon as possible, which would help the nation to be one step closer to reaching herd immunity. In a prior interview, when asked about whether freshmen should be worried about not being able to receive the vaccine, Alex Wang ’24 said, “personally, I don’t really care, and the majority of the freshmen probably care even less. So I don’t think that it would bother us.” The freshmen student body have seemingly not expressed any extreme concerns about not being able to receive the vaccine. With this new layer of protection with the COVID-19 vaccine, those who are worried about the freshmen student body, including those students’ parents, would be able to rest with ease knowing that everyone at SHS can receive the vaccine.