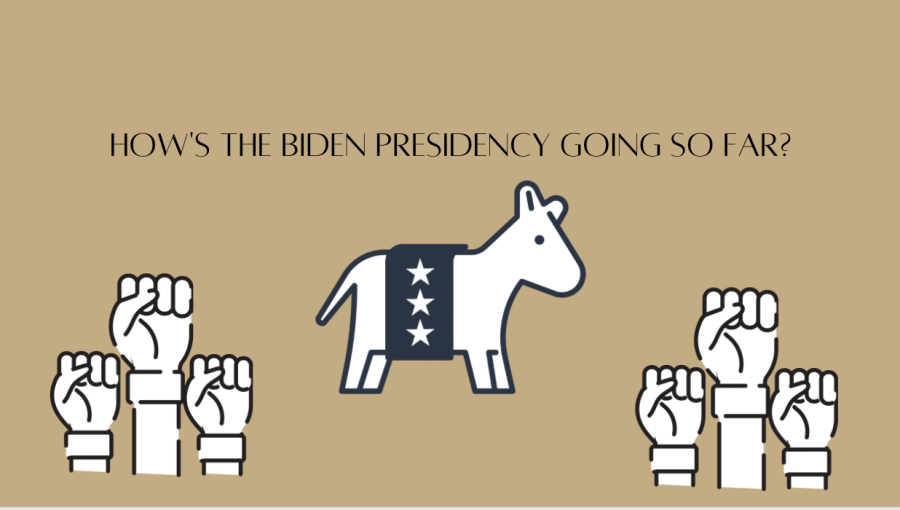 Since Biden's election to the White House, the question that persists is whether or not he has accomplished much?

Whether Americans approve or disapprove of how their president has been handling his job is possibly the most commonly asked question in politics. The start of Biden’s presidency was marked with complications concerning COVID and the precursory Donald Trump. Distinctively, President Biden passed a controversial stimulus bill for pandemic relief. He achieved his goal of 200 million vaccinations within his first 100 days in office. He rounded Republicans in attempts to convince them to support his exceedingly ambitious infrastructure bill. Nearly a year into his presidency, Mr. Biden grapples with issues spanning immigration, the economy, foreign policy, coupled with the ever-present COVID pandemic mayhem. It becomes pertinent to reflect and review; how good of a job has President Biden been doing?

Amid the post-COVID society, concerns over illegal immigration have rocketed. According to a poll by Quinnipiac University, independent voters and women, who were key in electing President Biden, ranked immigration as the second “most urgent issue facing the country today.” Interesting insight on the US economy tells us that the current labor market yields an excess of available jobs that far exceeds the number of job seekers. This makes the raging distress over illegal immigration distinctive in that it does not revolve around the concern that foreigners “deplete American jobs,” as Politico reported. Rather, as thousands of people illegally enter the country, many of Biden’s previous supporters express discontentment over the administration officials, who have significantly downplayed the crisis. Several White House advisers have stated that tougher enforcement measures are necessary, yet President Biden’s team remains fearful of blunders that could potentially provoke an internal national crisis. To top it off, many citizens believe that immigrants are not only draining education, housing, and welfare resources but are also entering at a period where the country is still trying to curb its pandemic-related health issues.

The Biden administration has been expanding its partnership with Mexican authorities. It firmly defends the “Title 42 health code” which supplants U.S laws that give immigrants the right to asylum, prevent individuals from being sent back to countries where they would face persecution, and protect vulnerable children from human trafficking. In the past few months, thousands of Haitian refugees were aggressively deported back to their poverty-stricken country. As the Washington Post explained, while President Biden was successful in dismantling Donald Trump’s severe border policies, he failed to implement new asylum policies, resulting in chaos on both sides of the border. It is difficult to know the extent to which President Biden’s job-approval ratings are connected to the worsening chaos at the US-Mexico border. But with Democrats and Republicans alike expressing discontentment over the lack of response to pleas for asylum and the absence of COVID testing, it is clear that immigration is a prime concern for the Biden Administration to address- a concern that has not yet been addressed successfully.

Inflation has been a prominent concern across the globe, but the United States has emerged as one of the most affected countries. As the Pew Research Center reported, the US faced a 6.2% annual inflation rate in October. Currently, the country’s prices are rocketing at the highest rate in more than three decades. Poorer Americans have particularly faced damaging blows caused by inflation; food prices have risen across the board. As supply struggles to meet demand, Biden’s overly-large stimulus bill emerged as a rather large disruption, delaying the supply chain of consumer goods. President Biden’s $4.6 trillion spending bill appends an additional $1.5 trillion in deficits- without additional tax offsets- to the already crippling debt of $29 trillion. Both economists and regular citizens know that if the money supply outpaces production, prices will only continue to increase dramatically. The Federal Reserves have not been able to hold down the inflation rate thus far, and will likely face an even worse dilemma in the future. The wages of low to middle income are increasing, though the real wages after inflation still suffer.

Nearly all Americans are knowledgeable of the US’ hasty and unsuccessful troop withdrawal from Afghanistan. Most are ardently disapproving. What is worse, however, are the mounting and destructive sanctions the Biden Administration has imposed on the crumbling country. As the crisis worsens, President Biden faces pressure from humanitarian officials and lawmakers to ease the sanctions. Only a staggering 5 percent of the Afghan population has sufficient food. Hospitals everywhere in the country are crumbling as their supplies are depleted. The situation is dire. The Administration faces a difficult decision regarding whether to stand adamant behind their sanctions when dealing with the Taliban, or reduce the sanctions in fear that their implementation will worsen the humanitarian crisis. As the US presses on with its long-established sanctions, it becomes increasingly apparent that those who are harmed the most are the local citizens. It is important to note that the US has undoubtedly met some success in its efforts to curb the crisis. The $208 million provisions for humanitarian aid was certainly effective to an extent. Further, The Treasury Department has issued permits to alleviate sanctions in order to provide money for basic necessities such as food, medicine, and shelter. These licenses also allow cash to be transferred to individuals in Afghanistan who are not sanctioned. Clearly, the Biden Administration deserves some credit in their dealings with Afghanistan as their efforts have paid off to quite an extent. However, humanitarian organizations have stated that the foreign aid has and will not be nearly sufficient. And time is running out as Afghanistan struggles to meet the needs of its citizens with its collapsing institutions and infrastructure. Most importantly, a deal should have been made for the basic rights of women before the withdrawal.

It is worth noting that Joe Biden’s presidency is only a quarter the way through- he has three more years to reshape and progress our economy and our standing on the world stage. As seen in his inauguration, President Biden does not cower in the face of challenges. He declares “We face an attack on democracy and untruth, a raging virus, growing inequity, a sting of systemic racism, a climate in crisis, America’s role in the world. Any one of these would be enough to challenge us in profound ways, but the fact is, we face them all at once.” With the long road of reparations in front of us, American citizens can look down the path, searching for a trail that could perhaps lead to a beautiful meadow.