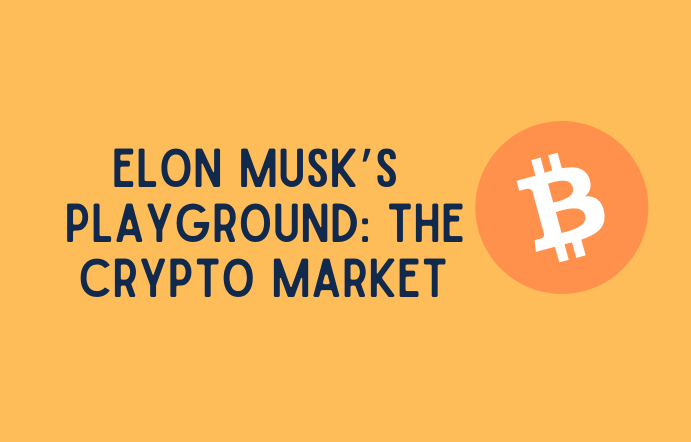 Elon Musk aids in the popularity and success of cryptocurrencies in 2021.

To provide some background information, during February of 2021, Elon Musk announced that Tesla was buying $1.5 billion worth of Bitcoin and would be accepting it as a payment method to buy their electric cars. After releasing this statement, Bitcoin’s growing trend in price spiked from around $34,000 to $56,000. Since then, Bitcoin continued its growing popularity and price and reached a peak of $64,000 on April 13th, 2021. By the end of May and the beginning of June, the price of Bitcoin fluctuated from around $50,000 to $60,000. In late May, Elon Musk said, “Cryptocurrency is a good idea on many levels and we believe it has a promising future, but this cannot come at great cost to the environment.” The computers and hardware used for Bitcoin mining use large amounts of energy, which seemed to be the main reason for Tesla’s partial withdrawal from Bitcoin. On June 13th, Musk tweeted, “Tesla only sold ~10% of holdings to confirm BTC could be liquidated easily without moving market.” He then went on to say that when there is a more reasonable use of clean energy by miners, Tesla would once again accept Bitcoin transactions. After this tweet, the price of Bitcoin immediately jumped from $35,000 to around $40,000.

In early June, Elon Musk posted a meme of a couple breaking up on Twitter with the caption, “#Bitcoin” followed by a broken heart emoji. Due to this cryptic tweet, many people who invested in Bitcoin have started to worry. Elon Musk and Tesla were major contributors to Bitcoin’s increased price and if this strange tweet meant that Tesla’s investment in Bitcoin would be withdrawn, then people would lose massive amounts of money. In response to Musk’s tweet, some Twitter users voiced their concerns, one said, “My wife is pregnant and my money is in crypto,” while others criticized Musk’s manipulation of Bitcoin and called him the “pied piper of crypto”. Another user continued to criticize him by saying, “I hope you understand that your tweets can lose inexperienced traders a lot of money … Stick to what you’re good at and go to Mars,” while others were supporting him and saying that despite messing with cryptocurrency, Musk still made “amazing companies” that are possibly the key to humanity’s future. “Elon musk should admit to his influence over crypto currency, specifically Bitcoin and Dogecoin,” Shuta Iwai ‘23 said. “With this acknowledgment, it is only fair for him to be responsible for his actions/tweets which sway the opinions of millions.” With over 50 million followers from all over the world, it is no doubt that with a tap of a button, Elon Musk can impact the world dramatically. With the case of Bitcoin, his impacts have mostly been negative to the massive amount of investors.

Around a month prior to his tweet on June 3rd, Musk had also posted another cryptic tweet. On May 7th, he said, “Cryptocurrency is promising, but please invest with caution!” Immediately following this tweet, Bitcoin’s price plummeted from the price of around $60,000 on May 7th to $35,000 on May 28th. Due to these confusing tweets and messing with the cryptocurrency economy, Elon Musk has faced a lot of backlashes. One of the most well-known criticisms was from a notorious group of hackers: Anonymous. On June 5th, a video was posted to Twitter of a man wearing a Guy Fawkes mask, or the Anonymous mask, and they said, “Recently… people are beginning to see you as another narcissistic rich dude.” Elon Musk’s manipulation of the crypto market has caused people to become millionaires overnight or has caused people to lose all their savings. Although Anonymous themselves have denied the making of this video, their actions are as unpredictable as cryptocurrencies themselves.

Elon Musk’s tweets no doubt have a large influence on the crypto market and have led to the dramatic fluctuation of Bitcoin’s prices. When asked about the current state of the crypto market, Iwai said, “The volatile market, which seems to be mostly built around skepticism, should always be seen with caution for any investor to step their foot in it. Without any prior knowledge on the market, you’re playing with quicksand.” The uncertain nature of the crypto market in addition to Elon Musk’s obscure tweets show that the crypto market can be very unreliable at times and people should be careful with how much they invest. Overall, the way that Elon Musk has influenced the crypto market is only another feat to add to his list of how he has affected the world.