Check In With the Varsity Hockey Team 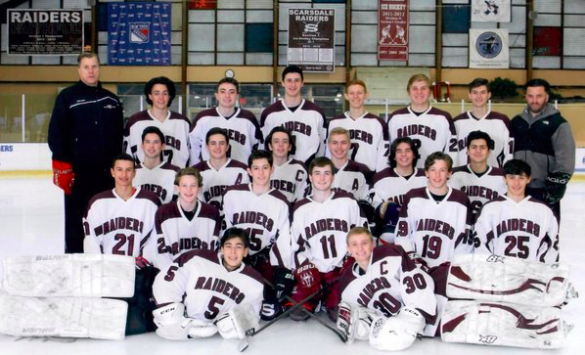 The winter season is one highly waited upon, not because of the snow or the sledding, but for the Scarsdale varsity hockey games.

Goalie and captain Sam Seltzer ‘18, and captains Mike Schur ‘18, Ben Schwartz ‘19, and Jack Brosgol ‘19 have all been on the team since their freshman years. “Sam has been a huge part of our success this season. His confidence in the net has exceeded everyone’s expectations. He has allowed us to worry less about shots to the net because we know he will be there to make the saves,” said Schwartz ‘19. Kevin Wright has been the head coach for varsity for two years now, working with first year assistant coach Mike Chiapparelli. The varsity team is stacked with kids from every grade, each with their own strengths. “Each member of the team knows exactly what it takes to win, especially the seniors who were around for the section championship. In the beginning of the season we established a work ethic that could probably not be matched by any other team,” noted Josh Bock ‘21, a freshman and starter on the team.

The game against Suffern on Saturday, January 22 was quite the event. There were penalties left and right on players even multiple times in one shift. Coach Wright tried to protest the referees’ unfair calls, which ultimately got himself suspended from coaching the next game. The game ended with a 0-3 loss for the Raiders.

Without Coach Wright, the team managed to pull through with a win against Stamford. “In order to stop the losing streak we had to rethink our game. We abandoned the systems and just played tough hockey for a full 45 minutes. After the game, we had the most fun that we’ve had all season. We listened to music on the bus ride home and had a great time,” said Bock ‘21.  “I think that our team will only continue to get better throughout the rest of the season because the players are becoming more experienced and learning how to further improve after each game,” said Schwartz ‘19, “As more fans continue to come to the games, our physicality increases and our speed becomes harder for other teams to match.”

There are only a few more games until the playoffs, which begin next week.