Be More Chill (something we as Maroon should probably consider) Review

Chances are that you’ve never heard of the Broadway-bound musical, Be More Chill. So stepping foot into the Pershing Square Signature Center to encounter a seemingly endless, energetic sea of theater goers—a crowd that raves about their Twitter fan accounts for this musical—may be confusing. You don’t think you’ve seen any advertising for this show, but it seems so popular. With no marketing resources, Be More Chill became an instantly sold-out sensation. The explanation behind its exponential popularity? Social media.

The show, based on the novel by Ned Vizzini, follows Jeremy Heere (Will Roland; Dear Evan Hansen), a quirky, video game enthusiast who signs up for his school’s play to talk to his play-rehearsal-obsessed crush, Christine Canigula (Stephanie Hsu). Jeremy hears of a new technology called a Squip, a pill containing a computer that can implant in his brain and instruct him how to follow the title’s injunction: be more chill. With that would come a chance for Jeremy to escape the social isolation he has experienced his whole life. He is immediately intrigued by this opportunity, as the pill will finally help him to approach Christine without the hindrance of his debilitating lack of social skills. Although Jeremy’s best friend, Michael Mell (George Salazar), is initially apprehensive that the Squip will draw Jeremy and him apart, Michael is ultimately supportive of his friend and encourages Jeremy to buy the pill. Once the Squip (Jason Tam) is swallowed and activated by Mountain Dew, Jeremy’s every move is accompanied by the computer’s voice and advice.

The Squip (Jason Tam, right) teaches Jeremy (Will Roland, left) how to “be more chill”

The show’s sci-fi spin on a story of the typical high school struggle emphasizes the ever-constant presence of technology in teenage culture. The stage floor is filled with adhesive metallic decorations that resemble wires on the circuit board of a computer. This strategic set design choice is perhaps made to emphasize the dependence on technology, as it is (literally) the foundation upon which character interactions are made throughout the show. The role of technology and the stereotypical high school popularity concern makes Be More Chill somewhat of a hybrid between Tony-winning musical “Dear Evan Hansen” and the 80s rom-com “Can’t Buy Me Love”.

And—coincidentally, in the same fashion as Jeremy—technology is what made Be More Chill so popular. The show had a limited run back in June of 2015 at the Two River Theater in Red Bank, New Jersey. The show received mixed reviews, but critics were overall not thrilled with the production. Before the end of the 2015 production’s run, a cast recording was released. After bootlegs of the show spread on social media and the music gained traction on Spotify, Be More Chill exploded into a delayed fame. 97 weeks after the cast album was released, it reached Billboard’s top ten. To date, the album has over 150 million streams on music platforms.

Due to the show’s massive following on social media, it was not long after the announcement of the 2018 Off-Broadway run that tickets sold out. Initially set to run until September 23, the overwhelming response from fans extended the run until September 30.

The highs of the musical included George Salazar as Michael, who delivered an incredible performance of the song, “Michael in the Bathroom”. The song paints a relatable story of loneliness, as a vulnerable Michael hides in the bathroom of a house party after Jeremy, invested in newfound popularity, abandons their friendship and neglects Michael’s presence. The passion with which Salazar performs this number is more than appreciated by the audience, as he received loud applause both after this song and by veteran fans upon his first appearance onstage during act one. I would be shocked if he were not nominated for a Tony Award once the show opens on Broadway in 2019.

Be More Chill’s social media presence and dedicated fan base foreshadows immediate success to come with its Broadway run, but the long-term popularity of the show seems to be compromised by its very specific audience. Although the show in many regards successfully captures the essence of high school, loneliness, and a longing to be wanted, a great deal of Broadway’s revenue comes from older audiences. The sci-fi elements are not necessarily something that would appeal to audiences who enjoy long-running classics such as “Phantom of the Opera”, as Be More Chill is more fun than it is sophisticated.

Something I have noticed after seeing many shows is that a successful score is one that incorporates songs you can sing without feeling tethered to the show’s plot line. For example, “I Dreamed a Dream” from Les Misérables is an iconic, show-stopping ballad. However, its memorable qualities do not need to be exclusive to performances of the show. The tune can be performed without any relation to France. Meanwhile, a flaw I noticed in Be More Chill was that its songs, while fun, are incredibly specific to the plot. While many are catchy, I do not see the possibility of being able to sing “It’s from Japan. It’s a gray, oblong pill. Quantum nano-technology CPU. The quantum computer in the pill will travel through your blood until it implants in your brain and it tells you what to do” without feeling out of place. The musical numbers are extensions of the plot rather than tools to enhance the complexities of the show. Music is rarely used to add depth to the characters (with the exception of “Michael in the Bathroom”). Despite that, the audience did not seem to mind; they were still extremely entertained. I sat next to well-renowned composer Stephen Schwartz (Wicked, Pippin, Pocahontas), and he was laughing the whole time.

The cast was ten actors, but it was not until the final bows that I had the chance to count it and notice how small it was before the characters made their ways offstage. During the show, the lively environment made it nearly impossible for me to notice the size of the ensemble. The few issues with the musical did not change the fact that so many young fans appreciate it. Although it is cliché, Be More Chill shows that you don’t need an “upgrade” to your own behavior, life, and mannerisms to impress other people.

Be More Chill will be running at the Irene Diamond Stage at the Pershing Square Signature Center until September 30th, 2018, after which it will transfer to Broadway’s Lyceum Theater. Broadway previews begin February 13, 2019. 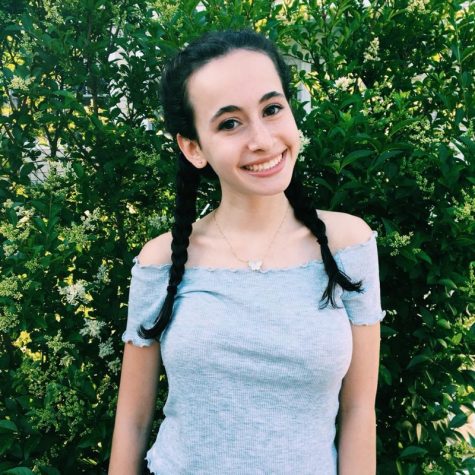