Back to the Future: A Fashionable Addition to SHS Halls

Three designs from an SHS Fashion Design and Illustrations class have been on display on the landing between the second and third floors of the main staircase. The pieces are the result of a class project where students worked in small groups to research and construct from paper a piece of clothing inspired by a decade of their choice; the items on display for the past few weeks were inspired by the 1980s, 1990s, and the 2000s.

Accurately recreating each decade’s clothing required a lot of thought. The 1980s dress was inspired by that decade’s fashion vibrant colors. “There are a lot of layers to [the 1980s dress], and if you look closely, there are a lot of small things like the ruffles on the collar that you may not immediately look at but add a lot of detail to the dress,” explained Allie Singer ’22.

The 2000s group constructed a grey jacket inspired by that decade’s booming music industry. “I listen to a lot of Kanye West so I was mainly inspired by his evolution. The two broken hearts on the cuffs were a nod to his 2008 album, ‘808s and Heartbreak,’” explained Henry Lazarus ’20.

The group inspired by the 1990s designed a top and bottom using only primary colors and black. The pants were inspired by the outfit in a photoshoot of the popular 90s girl-group TLC. In the photoshoot, they wore sweatpants with red, green, and yellow peeking through. The top resembles modern kimonos that became a popular fashion statement in the 1990s. 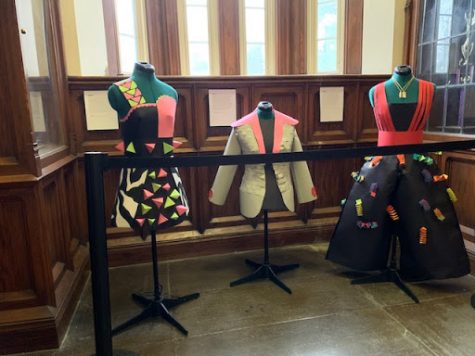 A photo of the SHS art installation on the main staircase between the second and third floors.

At SHS, there is a multitude of interesting art and projects that showcase students’ talents. This fashion exhibition by the Design and Illustrations class has provided a colorful addition to the main staircase, with many students stopping and appreciating the works inspired by the attire of different eras. 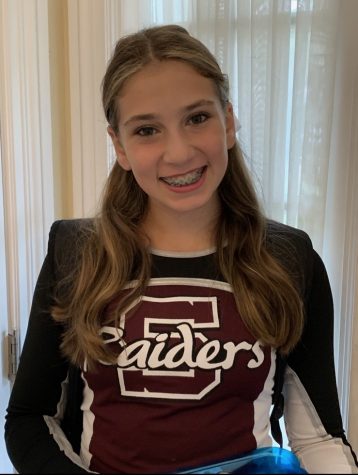