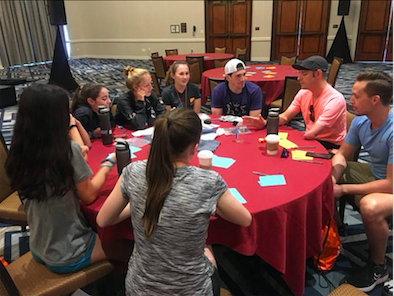 When students of the newly created AT Entrepreneurship class set out to decide upon a problem to solve, they found an answer at Sunshine Residential Homes, a children’s home and rehabilitation center for children with special needs. There, they empathized with the elementary to high school age kids who, like anyone, simply wanted to look nice and well-dressed, yet struggled to do so because of the uncomfortable, undignified medical-esque clothing that was their only available choice of wear. “You would have an easier time finding clothing for a dog than for a child with a disability—but particularly for us, that was for children who can’t dress themselves,” recalled Ali Rothberg ’19.

Rothberg was part of a team of seven other seniors in the AT Entrepreneurship class, consisting of Brooke Bensche ’19, Christine Lambert ’19, Jackie Newman ’19, Nayumi Parente ’19, Amanda Ruzumna ’19, and Tanner Zachem ’19. Under the instruction of STEAM teachers Brian McDonald and Lisa Yokana, the group spent time in class and outside of school on designing and redesigning a shirt for people who cannot dress themselves. They dubbed their project “Fabricating the Future.”

As a part of their AT Entrepreneurship class, the group entered their project in the Wells Fargo Global Impact Challenge. They did not think much of it until late March, when officials from the competition came to SHS to announce that the team of seven had won first-place. Their prize was $5000 to implement their project as well as an invitation, with all expenses covered, to the 2019 No Barriers Summit. No Barriers is an organization dedicated to creating a community to inspire people, many with disabilities, to live their life to the fullest and without barriers. Their annual summit, held this year in Lake Tahoe, California, invites speakers, showcases technologies, and holds fun bonding activities accessible to everyone. McDonald actually attended the summit last season, and in the beginning of this school year, the AT students went to a No Barriers event in New York to meet the past winners of the Global Impact Competition.

Having learned about their success on the same day senior options proposals for projects were due, the team of SHS students decided to continue working on their shirt and make their project presentable. The weeks leading up to the summit were fully devoted to improving the prototype into a final design. Working six-hours-a-day, five-days-a-week, the team ended up completely reiterating parts of their design dozens of times. After finding a seamstress in Chinatown who could produce batches of their product, the team brought their shirt to Pines Bridge School, another school focused on special education. Teachers let the team put their shirt on disabled students in a process known as ‘horizontal dressing,” the unconventional method by people who cannot dress themselves. The SHS students received feedback for reiterations of the design and were also praised for their ingenuity.

In order to better present and make their product understood by potential users, the students spent plenty of time on branding—making stickers, packaging, and an official website: https://www.fabricatingthefuture.com. The team also created an aesthetic yet practical shirt protector, an accessible feeding tube pocket, and an electric circuit that detects whether the student is properly situated in the chair.

Finally, on June 13th, the team arrived in Lake Tahoe. Their first day consisted of presentations to corporate representatives, like Nike Adaptables, as well as educators looking to guide their students on a project with a similar goal to submit for next year’s Global Impact Challenge. For the rest of the four day trip, the group revelled in the location’s natural beauty—hiking, kayaking, and swimming. But most memorable to the group was the people they spent time with. “Besides the beautiful location, I appreciated all of the incredible people that I met and either got to speak to or heard from. They had so many inspiring speakers, many that had disabilities and told us about what they had gone through in life. They were all so positive and strong,” said Parente.

What started as a simple class project had blossomed into an eye-opening venture that directly benefited others and brought real, concrete change to the world. The students give much credit and thanks to their ever helpful teachers, who were always helping them find opportunities and giving encouragement to the team. “I think working on the project really did feel like the real world, and we don’t always get a good sense of that in Scarsdale. AT Entrepreneurship was a unique class, but it was so much more than a class. I think that is what Ms. Yokana and Mr. McDonald intended for it to be, and I don’t think that I’d ever had a class that was supposed to stretch that far,” reflected Rothberg.